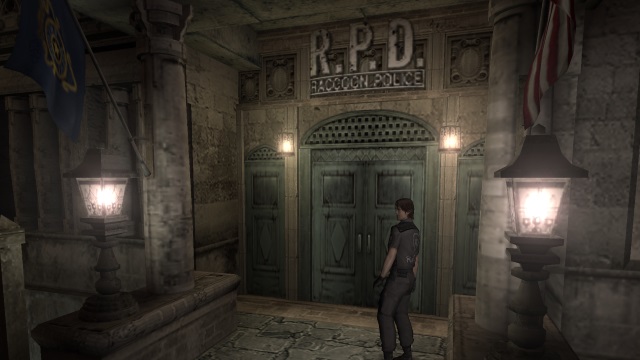 As wave after wave of the undead surrounded the city's last bastion of justice and hope, the time had come for the ultimate decision.

On Easy and Normal, the Autopsy Room and 1F West Hallway are unlocked from the start

# Codes for the level

Every so often, you will hear "CAUTION! WARNING!," and the room you're currently standing in will get filled with a yellow nerve gas. It drains your health extremely quickly, and will also skyrocket your virus gauge. You can use gas neutralizing canisters to clean the gas, or some herbs/pills to prevent damage for a while. It's better to just exit any room with nerve gas, if possible; after ~30 seconds, the gas will go away.

Your character starts in one of four rooms, depending on the difficulty. In Very Hard, player 1 starts in the waiting room; player 2 starts in the east office. Player 3 starts in the parking garage, and player 4 starts in the main hall. Each player has an initial task, which will make traveling a lot easier.

Push the crate three times, then wait for player 4 to take the Ace key from the cabinets. Then, player 4 must push the box four times, and give player 1 the Ace Key. Next, player 1 must climb the box to open the safe containing the first plate, take it and give it to player 4. Finally, player 4 must put the plate on the main hall statue, after removing the unicorn medal.

If for some reason you cannot push the box, try exiting and reentering the waiting room.

From the starting position, go right to the end of the hallway, then unlock the east wing door (this is the door where you use the heart key in classic RE2.)

Approach the car closest to the pillar, then push the crate three times.

Unlock the single door closest to your starting position. Then go up the emergency ladder at the end of the main hall, and turn right to enter the waiting room. Wait for player 1 to push the box three times, then climb it to obtain the Ace key. Descend, then push the box four times. Give the key to player 1, wait for him to obtain the first plate and give it to you. Return to the main hall and go past the emergency ladder to find some goodies. Pick them up, then descend the ladder and remove the unicorn medal (it doesn't go into your inventory automatically.) Put the plate where the medal was.

If for some reason you cannot push the box at the waiting room, try exiting and reentering.

Now you can properly start the map. Since your starting location is somewhat random, I will give directions on how to obtain each plate, then I will mention some other places of interest to obtain more goodies. Make good use of the items outside, and always replace any item you take with another one, even if it's just a measly stick.

In this scenario, you will need to open three additional locked doors. You have four ways to open them. First, Alyssa can use her lockpick to open any lock, including doors. Second, you can force tackle some doors, but zombies will constantly interrupt you. Third, you can reset the room as many times as needed, until zombies start breaking doors from the inside. Finally, the Joker key will unlock any door.

The Joker key can spawn in one of four places: on the roof, over some metal barrels; in the waiting room, on the floor close to the main hall entrance; close to the double doors in the main hall balcony (2F), hidden behind the rails; or inside the substation room, in a drawer right of the room entrance. A second Joker key is in the night duty room, but only Kevin can open the locker containing it. In any case, the following paragraphs assume you are able to open these doors.

# The quest for the plates

Proceed to B1F East hall. Unlock the autopsy room, which is behind the double doors left of the explosive canister at the T-intersection. Inside, you will see several cold chambers, and some goodies. If a cold chamber door is missing, the plate has been already taken! Otherwise, get close to the storage chambers and approach the left corner. Carefully pick up the plate; a zombie will escape the cold storage after you do. Get out of this room, picking up anything you may deem useful.

Proceed to B1F West hall. Unlock the kennel, which is located in the middle of the hallway. I will describe a strategy to deal with the dogs that works for me, but feel free to deal with them as you wish. Enter the kennel, continue straight through the T-intersection until the camera angle switches, then quickly do a 180 degree turn. Wait until your character starts facing the dogs, then return to the entrance, and wait for the dogs to approach the table with an herb. Exit and reenter the kennel, tackle the dogs, and quickly pick up the plate. Now hurry to the exit. If you did this right, you should have taken no damage (besides the occasional nerve gas.)

It would be a good idea to pick up the unicorn medal before continuing, and having as many item slots as possible. Proceed to the 1F lobby; at the end of the room, you will find a wooden pole, and a locked door. Unlock it and enter the west hall. Run past the rising zombie, and enter the second door you see (the other doors won't open.) On the rack next to the entrance, you will find a plate. Push the table in front of the rack twice, then enter the crawlspace for some goodies. As long as your character is going through this crawlspace, you won't take any damage, even from the nerve gas! This will also confuse any zombies in this room, since they won't be able to find you. Exit the interrogation room, and turn right to find a painting where you can use your unicorn medal. Take any items you might deem useful (sprays/recovery pills/magnum rounds,) then exit the room.

Proceed to the reception desk, located behind the double doors in Main Hall 1F. Open the drawers for some goodies, and check the document on the sofa for a password. Now exit this room and go to the R.P.D. east offices. Input the password on the safe inside Marvin's office (the one with an isolated desk.) Take the secret file inside, and proceed to the holding cells in B1F. Here, Ben Bertolucci (the journalist at the end of the hallway, who also appears in RE2 Leon's route) will give you a plate in exchange for the secret file. He appears to have a grudge against Alyssa...

Before putting the remaining plates, you might be interested in some goodies. There are several areas with plenty of ammo, weapons and healing items.

# Other places of interest

These can be visited either before or after the plates have been put in the main hall statue. Just mind the timer after the cutscene with the statue.

# Countdown to the siege

Now proceed to put the plates. After the cutscene ends, you have ~10 minutes to collect as much ammo, weapons and healing items as possible. You will certainly need them for the final part of this scenario. There are four main tasks in this part, though the first two are usually done together.

As mentioned, on Very Hard it's impossible for a single player to perform both 3 and 4, so you will need the help of a partner. Since 3 and 4 are pretty straightforward, I will give instructions for 1 and 2.

Pick up the padlock key, which spawns on the R.P.D. courtyard after the cutscene, remembering to swap it for something else. Proceed to the east offices, then open the door opposite the east hall. Pick up any goodies the dead officer left behind (including a film) before you aggro the zombies, then proceed upstairs to the 2F east hall, picking up any herbs in the way. Now turn right to the end of the hallway; you can find a recovery pill and a green herb close to the door. Enter the roof, and unlock the metal door with the padlock key. Pick up any goodies (shotgun/SMG/SMG clip/Magnum handgun rounds), and if you have inventory space, some wooden plates.

Now approach the dead officer and pick up the Film C. Return the way you came, and go back to the emergency stairwell. Go down, avoiding the crow and the zombies, and proceed to the R.P.D.'s front entrance. If you have any wooden planks, use them in either the single or double metal doors. Also, make sure to pick up the Film A, which spawns in this area after the statue cutscene. On your way to the basement, you might optionally want to revisit the kennel for the Film B, if you didn't find it earlier, located in the farthest cell. Now give all films to Ben, and he will reward your efforts with some very nice items. Films A and B can be exchanged for recovery pills; Film C will reward you with the Magnum handgun, and Film D with an SMG.

When you're ready, wait for the cutscene to kick in. You can also talk to Marvin to start the siege at any time, though this is not recommended in online play.

The following part is hands down the hardest in the Outbreak series. After the cutscene, you and your allies will be surrounded by a zombie horde. As you kill them, more zombies will spawn. You need a total of 50 kills on Very Hard online. Every round, weapon, or healing item will make this part a little less harder. For instance, the shotgun will throw zombies away when used up close; the burst handgun will do wonders if Jim shoots it, due to increased critical hit rate. And most importantly, the handgun HP always does the same damage, no matter the distance from the enemy. Potshotters should take full advantage of this.

Kevin and Alyssa should stay in the rear lines. Their potshots will save you tons of ammo. In addition, a magnum potshot will always kill a zombie no matter what. Mark and Jim should stay in the front lines, using their melee weapons. The rest of the team can take any available weapon, and start attacking. Note that the capsule shooter one-hit-kills zombies when loaded with anti virus pills, though recovery pills are a better use of herbs for George.

Try to stand together at all times. If you need any item, wait for the zombies to aggro on another ally, then quickly go pick up anything you need. If you ever run out of ammo, everyone can move to the area with the wooden crates, and start knifing away. This works best with David, but in a pinch, any character will do.

After 50 zombies die, the scenario ends.

← Flashback End of the Road →